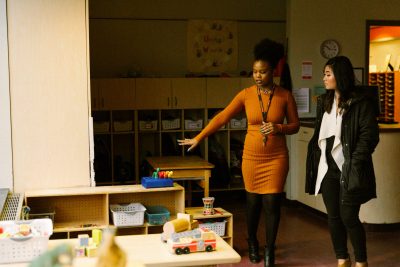 GRAND RAPIDS, Mich. — One of the hardest things for a working parent is childcare challenges, and if you feel like things have been harder than usual, you’re not alone. In fact, research from the Michigan League for Public Policy shows 44% of Michigan families are living in a childcare desert.

That means the ratio of children ages 0-5 to the number of licensed child care spots is greater than three. According to that study, only one county in the state had enough spots for children in 2020.

Courtney Bainbridge is a working mom and knows the reality all too well.

“It’s such a hard thing being a working mom because there’s that mom guilt that we carry of being away from our babies for so long,” Bainbridge said. “You constantly have like that conversation with yourself, like, do I just stay home and bite that bullet. Where is that balance at? Am I making enough to cover our daycare expenses?”

It’s just one of the many questions families are left weighing when it comes to childcare.

Bainbridge sends her kids to Reiber Family Daycare in Schoolcraft. Melissa Reiber started it a few years ago intending to have just six kids. “I went over six kids within four months, and that’s when I realized that childcare is a big need and it is hard to find good childcare. So I learned a lot real quick and had to bring in the staff. And I was full by, I think, month four, and I’ve been on a waiting list ever since.”

It’s a reality a lot of families are feeling across the state, according to the Michigan Department of Licensing and Regulatory Affairs.

“For a provider, the state has very high expectations,” Reiber said. “There’s a lot of rules and regulations that we have to follow. They’re there for a reason, I don’t disagree with them. But it does add to the stresses. We work at minimum 50 to 55 hours a week, and that’s just from open to close. That doesn’t include the grocery shopping, the prepping, and everything else that comes along with it. So, a lot of providers are exhausted. They’re just there’s whipped, and they just can’t do it anymore.”

It’s a two-fold problem: a shortage of options for families on top of an increase in cost as the pandemic has led to a rise in prices. According to a LendingTree study, childcare costs have increased by 61% in Michigan during the pandemic, and households are allocating about 16% of their income to childcare.

SEE MORE: Michigan ranks among highest for cost of childcare due to pandemic

“The kids wear out my house,” she said. “I also have to make sure that I take care of my employees. I want them to love their job, I want good employees in here. So I have to pay them well, which is another added cost. So, you have to compensate all of those costs into the fees of your tuition, but you don’t want to overwhelm your families because you’re basically paying a second mortgage every month for childcare. It’s so expensive.”

According to the research, a family at the state median income level, which is about $57,000, is paying about $10,800 for childcare. It has also been found that Michigan has the second-lowest income eligibility threshold for child care in the country heading into the pandemic. The MLPP says that in the past Michigan put so few resources into childcare that millions of dollars of unspent funds were returned to the federal government to be redistributed to other states. It’s why Governor Whitmer proposed changes in her 2022 budget proposal.

While work is being done on the state level to address these problems, local communities are also taking action. It’s one of the reasons the Edison Early Childhood Education Career Pathway was started. It’s a partnership between the Kalamazoo Literacy Council, Southwest Childcare Resources, and YWCA Kalamazoo to help people pursue a career in early childhood education. A major part of the program is a full-time, paid eight-month apprenticeship that will result in a childcare development associate credential.

“This will help,” said April Goodwin of Southwest Childcare Resources. “We are trying to work at building childcare providers along with getting a job. Also that those who want to become entrepreneurs would be able to start their own childcare.”

In fact, that is exactly what Melissa Reiber is working toward. “I have to admit I never ever dreamed that I would be 40, almost 44 years old, and going back to college. Never thought that that would ever happen. This whole experience for me has been very eye-opening and wonderful, tiring and exhausting. But I wouldn’t change it for the world. I never anticipated that I would ever think about opening a daycare center, but I don’t see myself ending this adventure at all. I really, really do enjoy it.”